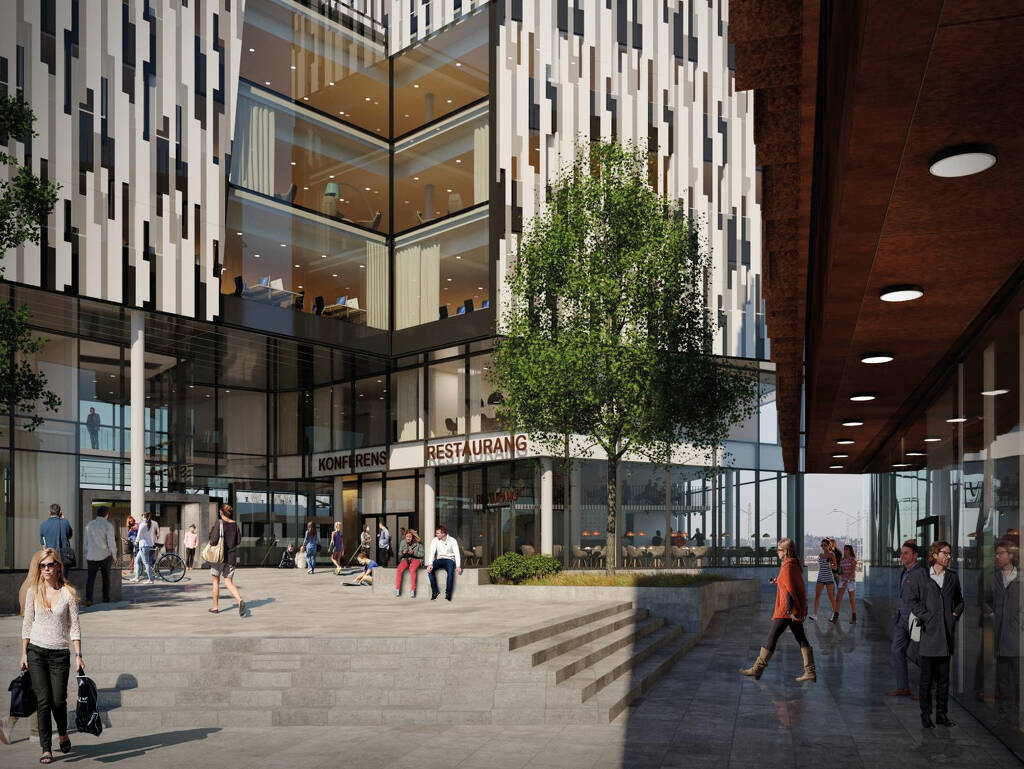 In May 2015, Serneke commissioned Sigma Civil as geotechnical design engineers for a construction project in Gothenburg. The objects consisting of 3 buildings, ranging between 5 and 18 stories, were to be built on a triangular shaped property surrounded by dual tramlines on each side and a dual train line just west of the western tramline. All tracks were with overhead lines and traffic was supposed to run along the structural works. Two underground levels were to be built below the complete triangular shaped property. Sigma’s role included geotechnical advisory concerning excavations and piling works.

The developer of the site is Platzer AB who commissioned Serneke for a design and build contract. The buildings are mainly purposed for a travelling centre and mainly office spaces, interlinking Trains, trams and buses. Thus, making this spot the new public travelling hub, interlinking the eastern parts of Gothenburg.

Planning of the piling works were preceded with technical reviews performed by the public Trafikkontoret, commissioned by the municipality of Gothenburg. Neighbouring contractor works by Trafikkontoret included new dual tram tracks on 2 of the 3 sides of the triangular shaped property. The third side of the property was built prior to present construction phase. All tramlines around the property were designed as bridge or piled deck structures. The dual train line consists of a station on a piled bridge structure. Hence, there were big risks concerning conflicts between the different piled structures for tram, train and new office buildings.

Ground conditions are very typical for the area consisting of made ground, clay on cohesionless and granular soil followed by bedrock. The soil parameters are relatively favourable with a generally constant shear strength around 20 kPa for the dominating clay layer. The ground water is divided into two different phreatic levels. One surface level, which is predominantly regulated by the nearby stream Säveån just south of the site. The second phreatic level is measured in the granular soil with a slight artesian pressure. It has not been investigated but believed that this artesian pressure is generated due to higher grounds around the site.

The main geotechnical challenge for this site remained within lateral soil displacement as a response to pile driving of precast, reinforced concrete piles with dimensions ranging from 235 mm to 350 mm in a rectangular shape. Hercules Grundläggning, a subsidiary belonging to the contractor NCC was commissioned the piling works. Equipment used included auger for pre auger to a maximum depth of 12 m. When analysing effects on soil displacement from the pile driving, pre-auguring was the main measure to prevent heave and lateral movements.

Initially Sigma was asked to analyse, predict soil displacements, and suggest measures to prevent damages on surrounding structures. All surrounding structures were founded on either bored steel piles or precast concrete piles. The Sagaseta method have previously been used in the area with relatively accurate results. Sigma initiated a series of Sagaseta calculations in order to predict soil displacements in a XYZ- direction. The method is time consuming and time constraints within the projects time plan suggested a more efficient approach for achieving an overall prediction around the whole area.

Sigma commissioned Gavin & Doherty to perform a 3-dimensional analysis by using Plaxis 3D. The analysis was based on site-specific background materials but also included bench marking from adjacent project experiences in the area of Gamlestaden. After successfully having achieved a model based on super pile groups including all 350 piles for the site a secondary phase was initiated generating probable effects on surrounding structures and their piled foundations. The models were reviewed by Trafikkontoret on behalf of Fastighetskontoret and it was finally concluded that a maximum lateral displacement of approximately 50 mm was to be expected for the most critical adjacent pile.

All loads on existing piled structures around the site are divided between structural and geotechnical loads. The naturally occurring settlements in the area generates negative cohesion on the piles, thus decreasing the load capacity for all structural loads. It was concluded between all parties that the negative cohesion is developed over a relatively long time span. Furthermore, adjacent piles are less exposed to negative cohesion due to the amount of piles in groups decreasing the actual load. It was agreed that 50 mm displacement in the piles would be a relevant limit for maximum lateral displacement.

In total 4 inclinometers were installed on site in order to monitor the soil displacements in the area. All structures were additionally monitored by surveying structural movements in XYZ- direction.

It can be concluded that the FEM analysis gave a very accurate result and actual maximum soil movements were recorded at 53,5 mm. This has ever since decreased since the effective stress has normalized a bit after finalizing the piling works. The only deviation from the analysis is that soil movements were recorded mainly in a northern direction. This is assumed the result of a major archaeological investigation pit approximately 20 m north of the construction site. All other sides of the site recorded movements far below 50 mm.

For more information on the project please contact Nicholas Lusack by email, nicholas.lusack@sigma.se or by phone +46 761 04 06 39.